What is an adjoining wall propping and what is it for?

We define an adjoining walls propping as a metallic structure that temporarily replaces the internal structure of the building (floors, roof …) during the remodeling operations of the latter, until the new definitive structure is completed.

Thus, this system is designed so that its assembly is carried out in the first place, allowing the demolition of the building in a safe way, as well as the execution of the final structure.

The propping of adjoining walls consist of a modular structure composed of SuperSlim beams and INCYE props, connected to each other by bolted joints.

The horizontal loads due to the wind and potential lack of verticality of the dividing walls, are transferred to the opposite adjoining wall, thus minimizing displacements and preventing the collapse of the wall into the interior of the building once its structure has been demolished.

The connection of the props to the adjoining walls is carried out by means of chemical anchor bolts, the number depending on the load to be withstood.

Lighweight beams with a compression capacity of 150 kN SLS per foot. It is the most versatile lightweight modular system. 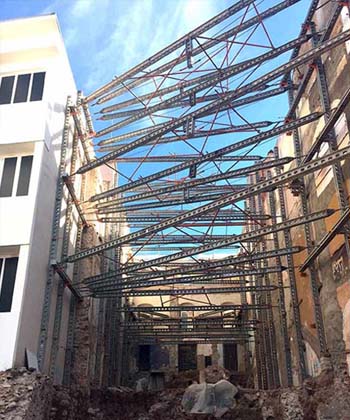