The enlargement of Yesa Dam on Aragón River, managed by the River Ebro Water Resources Management Bureau was commissioned to Yesa Joint Venture, which hired INCYE to design, manufacture, deliver and install a dragscreed for the upper layer of the upstream side. The requirements were:

Thanks to its superior engineering level and expertise within the RMDK group, INCYE took on the challenge and delivered not only the dragscreed but also (a) all the systems and equipment required for the reception, transport and distribution of concrete; (b) rails for the displacement of the machine on the wall; (c) lateral formwork for the concrete strips; (d) trolley for the distribution of rebar to be placed prior to concrete distribution.
INCYE’s design was above and beyond the typical dragscreeds provided by other competitors due to its high automation level which resulted in outstanding efficiency and safety.

INCYE’s dragscreed encompassed a concrete feeding system located at the crest, distribution pipes running down to a chute at the front of the machine and a transverse conveyor belt that allowed for the uniform distribution of concrete across the strip.

The machine was a fully automated machine thanks to a central console that hydraulically controlled the advance, allowing for independent regulation of all 4 wheels. The front was equipped with a rack of hidraulically operated vibrators. All these elements were crucial in order to guarantee smooth advance as well as the required thickness and compactness of the strip. The existence of a central on-board dashboard facilitated the safe operation of all devices.

Because longitudinal rails (which also acted as support elements for the lateral formwork) were directly anchored to the upstream wall and its surface was not a perfect plane, the 3-D adaptation of the dragscreed’s wheels to the wall slope proved to be a decisive feature of our solution.

The system was complemented by a rebar transport trolley with a 2 tonne capacity that could move up and down the slope thanks to a winch anchored to the crest. The winch could be removed and located at the centre of each new strip prior to the installation of the dragscreed at the top the same strip. 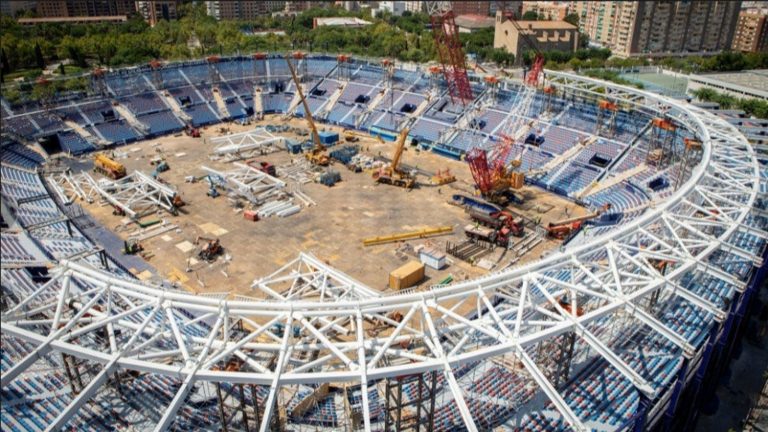 Remodeling of the Levante U.D. stadium

Levante U.D. decided to replace the roofing structure of its Ciutat de Valencia stadium at