On the occasion of the construction of a new residential space in what were the old garages and workshops of the Madrid metro, designed by Antonio Palacios and which are located near Cuatro Caminos roundabout, in the area framed between streets Reina Victoria, Esquilache, Pablo Iglesias Ave and Ramiro II, dating from 1918, it has been necessary to preserve part of the façade that faces Esquilache street.

The area of the façade to be conserved has a length of approximately 60 meters in what were the garages and workshops and a length of about 20 meters in what was the Tuduri building, which housed offices and subway houses and where the engineer and soccer player Andrés Tuduri, hence the name of the building.

Due to the high degree of protection of the façade, a stabilizer design has been made that allows to secure the façade without any damage to it, avoiding at all times having to drill or anchor. To do this, the interior and exterior tie straps were joined at the points close to the saw teeth on the façade, making a bundle of wood against it.

Stabilizing the façade consists of having a system that replaces the elements that stiffen the façade against the stresses caused by the wind. By eliminating these elements, we must place a system capable of keeping the facade in position, ensuring that the wind will never cause it to overturn.

The stabilization system that we have designed consists of 8 Granshor-type lattice units, 10.38 meters high, 6 of them located on the façade of the workshops and the other 2 on the façade of the Tuduri building. . The Granshor lattices are placed on metal frames on which prefabricated elements weighing 2.5 tons each are placed, to serve as a counterweight against the tipping of the system. The stabilization system supports the facade by means of Superslim lightened beam belts, which are retained with wood against the facade and transmit the loads to the main elements of the stabilization.

At Incye we are always committed to the conservation of our Historical Heritage, designing solutions that allow its maintenance and, at the same time, are respectful with the environment. 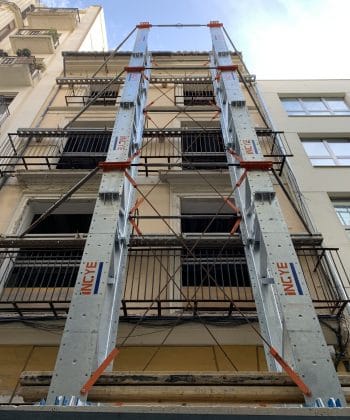 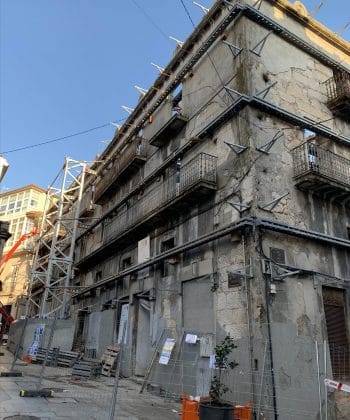 Palace of the Marquis of Valladares, Vigo 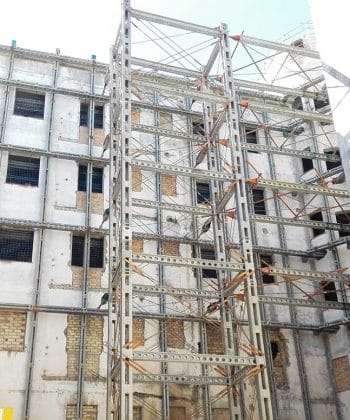